18 replies to this topic

I prefer to use viral mailers instead of safelists.

If your aim is to build your email opt-in list, then both will

I must admit though that viral mailers have the advantage

benefits. If only those signing up had good promotional

skills they would be a killer! lol

Make Money Online With 15 Powerful And 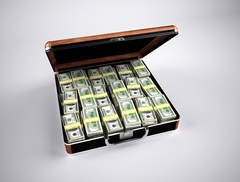 - Viral Mailer are all credit based.

I'm in the same camp as Darren.  The differences are so small and they both perform the same function so I just

considered a Viral Mailer an updated version of a Safelist.

I'm in the same camp as Darren.  The differences are so small and they both perform the same function so I just

considered a Viral Mailer an updated version of a Safelist.

Yep! Viral Mailer are an updated version of credit based safelists.

A few of the big safelists converted to the LFMVM mailer script (updated?) and I deleted my accounts in them because of it

I think much of the classification we use does have to do with the script type though.

Before LFMVM came along, I had three categories in my bookmarks - List Builders, Safelists and TAEs. And I had a system with using them. Then LFMVM started and I had (and still have) a bookmark called "New script mailers", which has swelled to huge by now

I've always viewed these differently, and always gone to my "List builder" file first for larger campaigns (even though many of the sites in there would probably be called viral mailers in other peoples classifications)

2.You Will win cash prizes for reading mails

1.You will get daily weekly and monthly rewards

Both safelists and mailers have their advantages and disadvantages...but in the long haul, best to include both of these in your marketing strategy.

I have been using safe lists for years and now I have added many viral mailers.  I do not see any difference.  I don't care what you call them.  If you are getting results, then keep doing it

Viral mailers for me... just need 1 email to get started, not to much junk.. little less people to reach as a safelist.. but much better for me!

I've tried both and noticed no real differences in either one.

Go VPN Unlimited now gives you control of your online privacy so can stay anonymous from prying eyes even while you shop, socialize, bank or just trying to enjoy a worry-free digital life.

i still like both of them, but when you're in a hurry viral mailers is the best.

I prefer to use viral mailers instead of safelists.

Whats the difference in Safelists and Viral Mailers?

there is no difference, they are all safelists. Viral mailers arent "viral" in the true definition of that word. I still to this day dont know why its called that. Mailer and safelist terms have been the same thing for I guess 15+ years now... They are both used for the same thing - a safelist which was the orginial word.

It doesnt matter if it asks for a contact email along with a safelist email - thats not new at all.

Someone told me that a couple years ago, that it set it apart somehow. No, not new, and not correct.

Back to Safelists, Mailers, Autoresponders


0 user(s) are reading this topic